“The aging, outdated craft employed by the Rebels are no match for the power of the TIE.“

A swarm of Tie Fighters leaving a Star Destroyer has become one of the most iconic scenes in all of Star Wars and the most frustrating for the rebels to deal with however that doesn’t stop this fantastic POP! from being front and centre of our Funko collection. These star fighters are an unforgettable reminder of the power of the Imperial Fleet and now you can add one to your POP! collection with this Star Wars Funko POP! Rides #221 Tie Fighter with Tie Pilot POP! Vinyl and celebrate 40 years of Star Wars.

The first in the series of advanced twin ion engine starfighters. The original TIE fighter was developed by Sienar Fleet Systems. The agile single-pilot craft has a titanium alloy hull, and quadanium steel armored solar panels, however lack deflector shields and primary life-support systems. Intended to be used as a short-range attack craft, launching from nearby Imperial installations TIE Fighters typically attack in swarms to overwhelm their opponents.

No Star Wars collection is complete without this incredible figure. POP! includes not only the pilot but also the iconic star fighter itself. It was said that for every TIE fighter that is shot down, a thousand more will be ready to take its place. Help crush the Rebels amongst your POP!s by adding this incredible POP to your collection now! 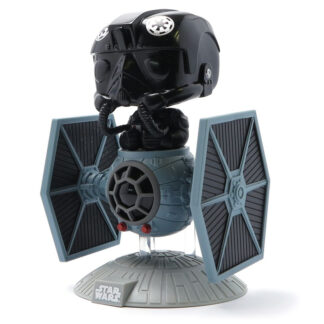