This Pop Vinyl features Sidon Ithano, nicknamed the “Crimson Corsair“, the “Blood Buccaneer“, and the “Red Raider“. Ithano is a Delphidian Pirate from the Outer Rim Territories following the decades after the Galactic Civil War. Known for his distinctive red Kaleesh mask, he led a crew of pirates that gained him the reputation as the best pirate in the Outer Rim and for good reason having fought serval battles including Adratharpe 7, being the first pirate to ever sail the Lost Clusters and finding Count Dooku’s lost treasure aboard the Obrexta III.

Thirty years after the Battle of Endor, the Empire has reassembled itself out of the ashes as a new militant force known as The First Order, while X-Wing pilots now fly for a splinter group of the New Republic, known as the Resistance. New heroes and anti-heroes, like that of Sidon Ithano, have awoken in the terror of the First Order, to bring hope to the galaxy, as many old faces return to help guide their way.

The second wave of POP! figures for ‘The Force Awakens’ have arrived. This 2nd series brings us the new versions of Han Solo and Leia in all new outfits, as well as some new characters never before seen. The Force Awakens POP! vinyl figures stand around 9cm tall. Packed in an illustrated window box. 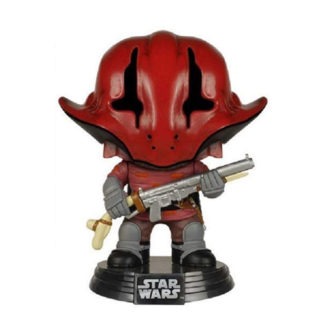