– “The only time I fail is if you hired me to fail”
– The most feared bounty hunter in the galaxy
– Exclusive 10-Inch Red Boba Fett Funko POP! Vinyl
– Comes packaged in a window display box.
– A must have for Funko collectors and Star Wars fans.
– Add to your collection today.

The most feared bounty hunter in the galaxy (far, far away and a long time ago) is now the star of his own Disney+ TV show: The Book of Boba Fett. Returning after his appearance in the Mandalorian, and following what happened after Return of the Jedi.

Born on Kamino, the planet of the clones, Boba Fett is a Bounty Hunter who is the genetic replica of Jango Fett. Boba was raised as Jango’s son and trained in combat to become a bounty hunter. When Jango was killed during the Battle of Geonosis (the battle which sparked the Clone Wars) which caused young Boba to swear vengeance on the man who killed his father, Jedi Master Mace Windu.

Figure measures about 10 inches tall and comes packaged in a window display box, please note images shown are artwork and final product produced may vary. A must have for Funko collectors and Star Wars fans. So add to your collection today.

GeekVault is based in the UK and ships world wide. Your friendly neighbourhood geek shop. Bringing you all the best Funko POP! Vinyl’s. So enter the Geek Vault and find something for every fan! 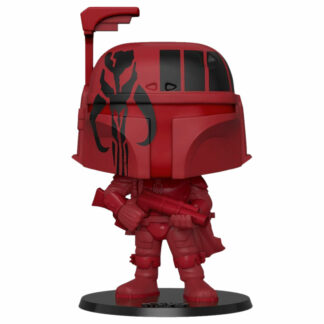