So there’s this scientist, his name is Rick, and i kid you not he turns himself into a pickle; He’s called pickle Rick… Funniest S#!t Geek Vault has ever seen…

Get excited everybody because Funko have outdone themselves once again in celebration of SDCC. This Morty is from a dimension where a series of very unlikely geopolitical events, coupled with an incredibly popular dance craze, caused everyone to dress like cowboys.

For those poor Noob Noobs who may be unaware, Rick and Morty follows the adventures of an alcoholic genius scientist and his idiot grandson as they embark on dangerous missions throughout the multiverse, resulting in one of the most hilarious television series in recent history.

This Pop! features Western Morty, an alternate version of Morty who appeared in “Close Rick-Counters of the Rick Kind” during the first season. Made from high-quality vinyl and comes in an illustrated, windowed box, so you can see all the details up close without breaking into the package.

Add to your collection or start a new display with this piece at the centre! Suitable for ages 3 and over. POP! stands around 9cm tall.

Stock is strictly limited, so order now to ensure you don’t miss out on adding him to your Funko collection! 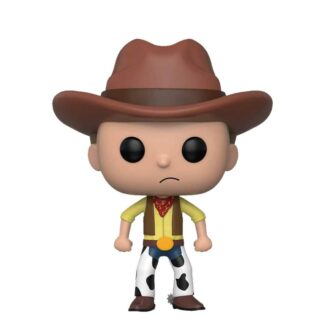