Report an abuse for product Funko POP! Disney: The Little Mermaid 10-Inch Ursula (With Glow In The Dark Trident) #569

“Yes I’ve had the odd complaint, but on the whole I’ve been a saint.” – Ursula

First appearing in Disney smash hit 1989 film ‘The Little Mermaid’. Ursula tricks a mermaid princess named Ariel into trading her voice for a pair of human legs. At first glance she appeared to be providing her with an opportunity to become human, but only temporarily. Ursula was determined to sabotage Ariel’s chances to earn the love of Prince Eric at any expense, so that she could ultimately replace the mermaid’s father King Triton as ruler over Atlantica.

The villainous sea-witch, Ursula who “helps” poor unfortunate souls, was banished from the underwater city of Atlantica by her longstanding rival, King Triton. Ursula was once supposed to rule the seas along with King Triton, but became too power hungry and devilish, gaining a disreputable reputation amongst the sea-dwellers.

This Pop! stands over 10-Inches tall and features Ursula with her trademark crown and trident. You can tell by the evil grin on her face that she has nothing but disaster planned! So we imprisoned her as a Funko POP! you can still see her magic in the trident, as it glows in the dark.

An absolute MUST for any Disney fan. Add her to your Disney collection today!

Be the first to review “Funko POP! Disney: The Little Mermaid 10-Inch Ursula (With Glow In The Dark Trident) #569” Cancel reply
Sorry no more offers available 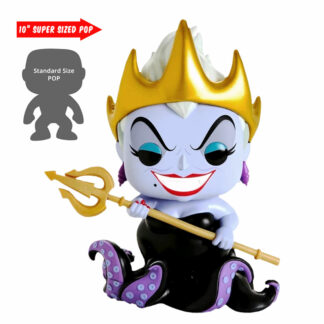