“I don’t know where you magic pixies came from, but I like your pixie drink!” – Barney Gumble

The Simpsons are back! With more influence on POP! culture then ever before. Barney Gumble is the town drunk and one of Homer’s best friends. Often seen in Moe’s Tavern either drinking or sleeping. This Simpsons Barney Funko Pop! Vinyl Figure comes packaged in a window display box and measures approximately 10cm tall.

It’s official the dome over Springfield has been lifted once more and are looking to find a home in your Funko collection today!
The Simpsons is one of the greatest television shows of all time, giving an entire generation kids an alternative to the 6pm news your parents were watching.
There’s no denying that The Simpsons is one of the greatest television shows of all time. Spending days glued to the TV watching Simpsons marathons non stop Simpson episodes back to back, while you waited for a family dinner.
Funko’s latest wave features some old favourites as well as some newbies to the Pop! line including Devil Flanders, Werewolf Bart and Springfield’s own Ad Icons Duffman brought to life!
GeekVault is based in the UK and ships world wide. Your friendly neighbourhood geek shop. Bringing you all the best Funko POP! Vinyl’s. So enter the Geek Vault and find something for every fan!
So don’t delay, your nostalgic happiness is just a Simpsons Funko POP! Vinyl away. 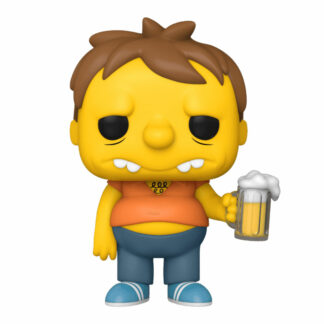