“Why don’t you pick on someone your own size…like me?”

The worst thing about being a monster is to be considered “cute” by humans as that comes as a disadvantage when you’re trying to scare people! Ickis knows this all too well, but he’s been working on perfecting his scare strategies even before he began attending the Gromble’s school.

Bringing you a little closer to the New York Comic Con experience with GeekVault! These limited edition NYCC 2017 special Funko POP! Vinyls are in high demand and are likely to be snapped up fast! We have very limited quantities on each Funko figure and when they are gone – they are gone forever! So grab one now while stock lasts.

Ickis is the protagonist/anti-hero of Aaahh!!! Real Monsters. Ickis scares humans using his ability to grow bigger however, due to Ickis’s large ears, he’s confused with a bunny often. This tends to cause him to lack self-confidence, partially from trying to live up to the legacy of his father, Slickis (who was the Monster Academy’s most renowned student). Ickis is room-mates and best friends with Oblina and Krumm where he goes to the Monster Academy. 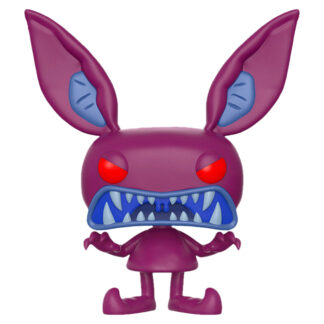