From deep in space comes the green lantern beacon, sent forth by… John Stewart; this is an excellent collectors item for any budding DC fan. After the acclaimed release of the first figures comes the next wave of DC heroes. DC Icons action figures go back to basics with iconic Heroes captured with all their intricate details. This nicely detailed and articulated John Stewart Green Lantern Action Figure stands approximately 6 3/4-inches tall. Arrives in window box packaging.

This figure is based on John Stewarts appearance in the Green Lantern: Mosaic Series in which Green Lantern Hal Jordan, investigates the disappearance of Evergreen City on Earth. Appa Ali Apsa, the lone remaining Guardian left behind after his brothers left our dimension, is discovered to be responsible. Driven insane by loneliness. For companionship, Apsa uprooted cities from across the galaxy and transported them to the planet Oa to create a new patchwork planet known as the… Mosaic World.

John Stewart, captured by Apsa, summons Jordan through their power rings and, together with Guy Gardner and the newly returned Guardians, defeat Apsa.

Believing that Apsa’s experiment should be allowed to progress, the Guardians elect to maintain his strange mosaic of communities. Accordingly, the Guardians assigned Stewart to act as the Green Lantern of the Mosaic world. Stewart was made Green Lantern of the newly formed world and assigned with maintaining the peace among the different communities; as well as attempting to construct a cohesive society from the disparate races

DC Icons is a line of action figures depicting DC characters with universal appeal, accessible to both long time collectors and those just starting out. Every product delivers authentic detail from a company with two decades of experience creating high-quality action figures. 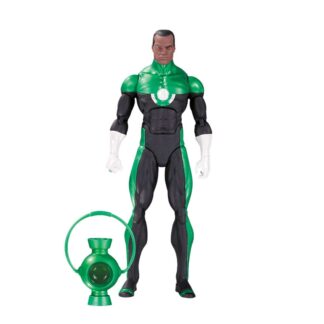