“This Syndicate has become weak, myopic and bitter. A bunch of bored aliens and freaks, looking down of the only human in the room while you play the best game we humans ever created. Crime…” – Owlman

Is it a Bat… Is it a plane… no It’s… an… Owl? that’s right you better believe it’s Owlman the evil alternative of Batman now available from GeekVault!

Similar to cats and dogs; bats and owls aren’t exactly on good terms. However unlike his name, Owlman’s suit is actually pretty bad-arse, with every detail featured in this EXCLUSIVE Funko POP! Vinyl figure, including his mind-tampering blue eyes are exceptionally awesome. More over if you loved reading Grant Morrison’s JLA featuring Owlman and the Crime Syndicate then this POP! is a no brainer, must have for DC fans.

Owlman AKA Thomas Wayne, Jr. is the Earth-3 counterpart of Batman. On Earth 3, Thomas Wayne Jr., the older brother of that reality’s Bruce Wayne is evil  and uses his vast intelligence, incredible skills and an array of owl-themed gadgets to enforce a reign of terror on Gotham City. He is also a member of the Crime Syndicate of America and fights alongside a sidekick named Talon.

The Thomas Wayne, Jr. version of Owlman first appeared in the late 1990s in JLA: Earth 2. This Owlman was developed to be reflective of the modern readers with a darker attitude and background than either of the two previous teams.

So wether Batman is your favourite JLA member or not you’ll want this DC Comics Funko POP! Owlman in your collection; to atleast keep his evil antics at bay… we would hope. 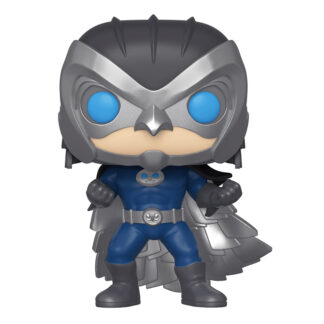