Your favourite Dragon Ball Z characters are getting the POP! Vinyl treatment!

Dragon Ball Z is one of the most critically-acclaimed anime series of all time, amassing an enormous fan base across the world and possibly the… universe?

The show follows the adventures of Goku who, along with his companions, defends the Earth against an assortment of villains ranging from intergalactic space fighters and conquerors, unnaturally powerful androids and nearly indestructible creatures. It picks up five years after the end of the original Dragon Ball series.

As a kid, the idea of an eating contest was a dream come true; although I never did get to compete. Stuffing my face with delicious food until I turned into a ball that could be rolled around like Violet Beauregard… now that’s the way to go! Of course now that I’m older I can see that loading up on bowl after bowl of carb-loaded noodles might be a problem, but clearly that’s no issue for the Super Saiyan Goku.

This POP! Features Goku sitting down and gorging on noodles as he prepares for the World Tournament. Which obviously makes sense, as he’s going to need all that energy to compete; whereas someone like myself who only needs a snack from the fridge to feel full, noodles should probably only be a “sometimes” food.

This Limited Edition Funko POP! Vinyl has 10/10 add to basket value after all how could you say no to an adorable Goku eating noodles. So add this Goku Eating Noodles Funko POP! Vinyl Figure to your collection today! 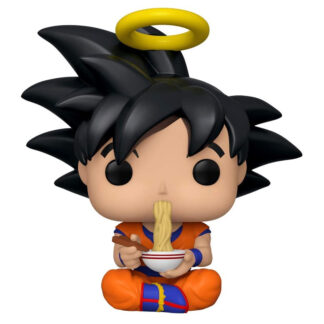