Enjoy a nice cuppa with your favourite super hero Batman. But beware, as you pour in your hot beverage, the Caped Crusader”s worst nemesis appears from the darkness. When cold, the DC Comics Joker Heat Change Mug has a black and white design featuring Batman and his alter ego Bruce Wayne. However, once warm, the heat changing decal comes into action and the colourful Joker appears from the black.

This mug is a great gift for lovers of the Batman franchise, and general fans of DC Comics. It makes a wonderful stocking filler, a cracking Christmas present and is also great for birthdays. First launched as Detective Comics in 1939, DC Comics is hugely popular with comic book fans around the world, and is one of the oldest and best regarded publishers in the genre. Over the years, DC Comics has been responsible for creating many of the best loved characters in pop culture history, including Batman, Superman, and Wonder Woman among others, as well as popular crime fighting teams such as The Justice League and Suicide Squad. This DC Comics Joker Heat Change Mug is an officially licensed DC Comics product. 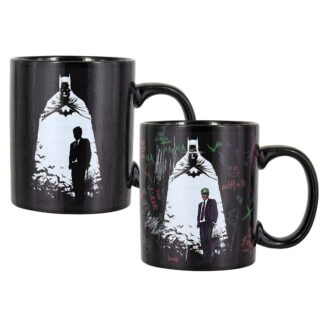 You're viewing: DC Batman and The Joker Heat Change Mug £7.99
Add to basket